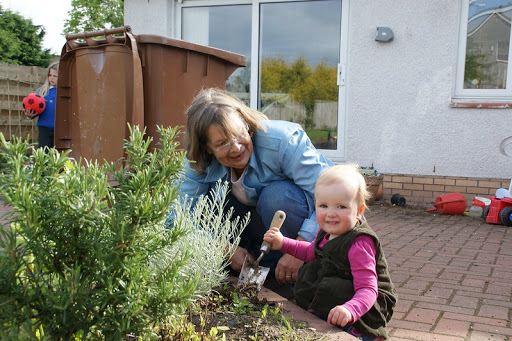 My parents have always lived in a house but to say they were never keen gardeners would be an understatement! They like a wee bit lawn, some quartz chips and an ornamental plant pot or two and would happily have someone else cut the grass if money was no object. They have never to my knowledge grown anything to eat: no herbs or fruit or veg. Consequently, what I learned from them was that instead of weeding, you cover your garden in plastic, put stones on top and then pots, thus removing the need to weed. Being more of a flowers and food girl, I didn't follow their polythene advice and therefore spend a good deal of my summers weeding. Thomas's mother was over seeing Amaia the second week in January. Brita is a big gardener. She went out to weed one day. I found this a bit strange given the baltic conditions but she explained that weeds are really easy to pull out in their dormant January phase. I went out to my raspberry patch to test her theory. The patch that is a day's work mid-summer took less than an hour to weed in January, and the weeds were so weak I could pull them out without a tool. I was amazed. Forty two, and just learning to garden now!
Posted by Phyl at 12:35 am

The Scudder said...
This comment has been removed by the author.
9:57 am