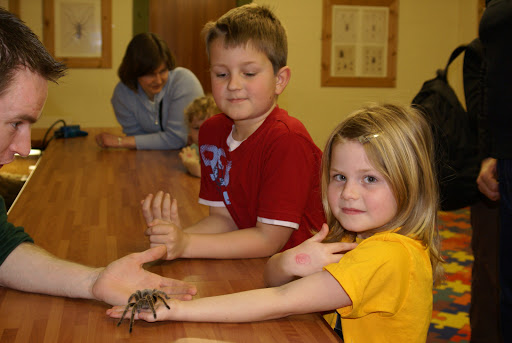 Charlotte has never been the easiest kid to fathom. From she was fairly small she has been quite afraid of dogs, and more than indifferent to most other pets - she would not have a cat, hamster or gerbil if you paid her. I don't know where exactly this dislike of animals comes from since, although as a family we aren't great dog-lovers, we have had various cats over the years. So when we visit a pet-owning family, Marcel plays with the animal while Charlotte tends to stare at the pet with something between indifference and loathing. So when Marcel asked to hold a snake at Glasgow's Amazonia zoo the other day I was slightly taken aback, when Charlotte too queued up, arms outstretched for a python. I knew for sure if the guy was holding a kitten or a fluffy yellow chick she'd have been out of there quicker than a tornado. However the tarantula was even more surprising. While Marcel hesitated and asked initially just to touch one of its legs, looking vaguely apprehensive, Charlotte stepped up even before Marcel and asked to have it sit fully in the palm of her hand. I guess she is always going to be a kid who astounds me.
Posted by Phyl at 10:29 pm

Don't you think she just suffers from mammalophobia?

I guess i know who to call the next time we have an 8 legged visitor - some of the ones we get in the house are about the same size as the one in the photo ;-)